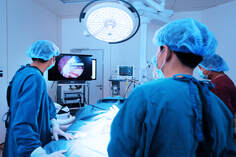 ​Laparoscopy is a procedure where the abdominal and pelvic  organs are visualised, confirming the transport component of the fertility equation is normal.

The procedure involves the passage of a narrow telescope through the umbilicus, with 2 or more 5mm instruments on other parts of the abdominal wall. These instruments allow the surgeon to palpate, mobilise and correct any anomalies involving the uterus, ovaries and fallopian tubes.

Your Gynaecologist will discuss the various pathologies that you may have and the treatment options for each condition. Your choice of option will always be supported by your attending doctors and staff.

Endometriosis
Endometriosis is well known to women as a cause of infertility, period pains, ovarian cysts, tubo ovarian adhesions and bowel problems. Much is written about the subject, and there are many informative articles on endometriosis available.

Ovarian Cysts
Apart from endometriosis, ovarian cysts can be caused by other pathologies, including ovarian cancer. It is important as soon as an ovarian cyst is suspected or diagnosed, that appropriate investigations are undertaken, including laparoscopy.

Tubal Blockage, Pelvic Inflammatory Disease and Adhesions
Tubal disease resulting from various pathologies can cause complications such as blockage, adhesions (scar tissue formation) and hydrosalpinx (blockage of distal tubal end), which can be corrected with laparoscopic surgery to help achieve natural conception.

Fibroids
Fibroids pose fertility problems by their presence at various sites in the uterus. Fibroid removal (myomectomy) can be performed by laparoscopy, but may require an open incision in certain cases.

PCOS
PCOS results in an elevation of male hormones and is sometimes associated with type 2 diabetes.  Miscarriages are often associated with PCOS and caused by high levels of LH. One of the more successful treatment for PCOS is by laparoscopic ovarian drilling which restores the hormonal axis. It also results in lower LH levels and can often reduce the risk of miscarriages.

Reversal of Tubal Sterilisations
Tubal reversals for previous sterilisations can be performed by laparoscopy with variable success rates. Success depends on the site and length of tube removed. Reanastomosis should be tension free; therefore a 2 step operation is often performed.
View more information about gynae treatment...